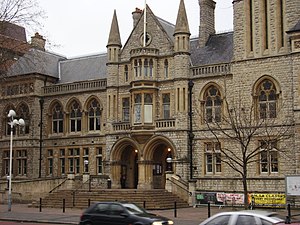 Ealing Town Hall
Ealing is the name of an area of West London and also of the London Borough in which it is located. The London Borough of Ealing was created in 1965 by merging the Municipal Boroughs of Ealing, Southall and Acton.

Ealing was the home of the Ealing Film Studios, opened in 1902.

There is currently an Ealing Gay Group.[2]