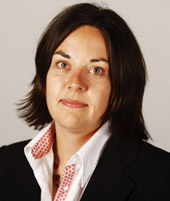 Dugdale has said that she was in a relationship with a woman as of 2016, but that she was disinclined to provide details of her private life.[2]