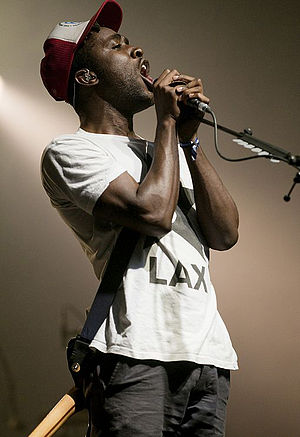 Kele Okereke
Kele Okereke (Kelechukwu Rowland Okereke, born 1981) is an English musician, best known as the lead singer and rhythm guitarist of the indie rock band Bloc Party. He was born in Liverpool to Nigerian parents, but grew up in East London.

In March 2010 Okereke came out as gay in a Butt magazine article,[1] and he then gave an interview and appeared on the front cover of the June 2010 issue of Attitude magazine. Previously he had been reluctant to discuss his sexuality, though he had compared himself to famous bisexuals Brian Molko and David Bowie, as well as Morrissey.[2] He also discussed the homoerotic story behind the Bloc Party song "I Still Remember" and the semi-autobiographical nature of it. In June 2010 Okereke was named as the Sexiest Out Gay Male Artist by music website LP33 in its annual survey.[3]

Kele Okerere was ranked number 56 in the Pride Power List 2011.