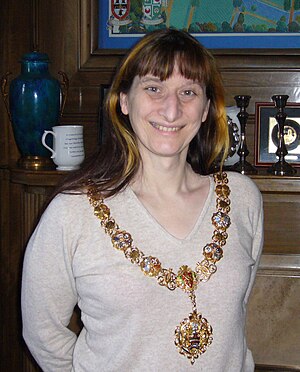 Jenny Bailey
Jenny Bailey, born 1962, is a telecommunications engineer and Liberal Democrat politician who was the first trans person in the UK to be a mayor.

She was born in Doncaster and studied at Lanchester Polytechnic (now Coventry University). During her twenties she was married with two children, but the marriage soon came to an amicable end. She began her transition in 1990 aged 29, and during hormone therapy met her current partner Jennifer Liddle, a software engineer,[1] who was having the same treatment.

Jennifer Liddle was elected to Cambridge Council in 2000, and Bailey followed her in 2002.[2] In 2007 Bailey was elected mayor, and took Liddle as her mayoress. After her year as mayor she retired from the council.

In 2011 Bailey and Liddle had a civil partnership. They live in Cambridge with Bailey's two sons.