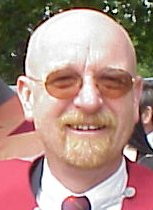 Jeffrey Weeks
Jeffrey Weeks (born in Rhondda, 1945) is a British sociologist, historian and gay activist. He has been described as:

"the most significant British intellectual working on sexuality to emerge from the radical sexual movements of the 1970s".[1]

Jeffrey Weeks joined the Gay Liberation Front in 1970, and was a founder member of Gay Left.[2]

He was Professor of Sociology at London South Bank University from 1994 until his retirement in 2008, and Executive Dean of Arts and Human Sciences from 2003 to 2008.