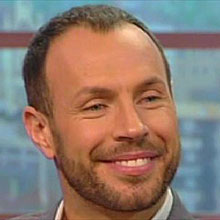 Jason Gardiner
Jason Gardiner (born Australia, 1971) is a choreographer, singer, and theatre producer best known for his role as a caustic and controversial judge on the ITV shows Dancing on Ice, Born to Shine and Stepping Out.

Adopted at the age of 6 months, Gardiner was born in Melbourne and grew up in rural Victoria. He was bullied at school for being homosexual and suffered from anorexia for two years until he came to terms with his sexuality at the age of 16.[1]