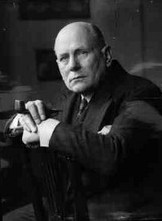 James Agate
James Agate (James Evershed Agate, 1877–1947) was a British diarist and critic. He was born in Pendleton, Greater Manchester.

In the period between the wars, James Agate was one of Britain's most influential theatre critics. After working in his father's business until his late twenties he found his way into journalism, being on the staff of The Manchester Guardian (1907–14); drama critic for 'The Saturday Review (1921–23), and The Sunday Times (1923–47), and holding the same post for the BBC (1925–32). Agate's diaries and letters, published in a series of nine volumes under the title of Ego, are a record of the British theatre of his era, and also of his non-theatrical interests, including sports, social gossip and his private preoccupations with his health and precarious finances. In addition to drama criticism he wrote about the cinema and English literature for London newspapers, and published three novels, translated a play and had it staged in London, albeit briefly, and regularly brought out collections of his theatre essays and reviews.

"You may have noticed that the tone of Agate’s writing is consistently camp; in the thirties he lived a gay lifestyle as obvious as it could be in those days when homosexuality was something you could be flung into prison for."[1]