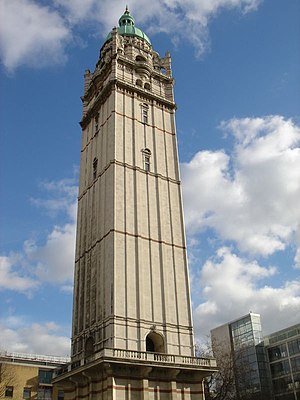 The Queen's Tower of Imperial College (originally part of the Imperial Institute)
Imperial College London is a university based in South Kensington, London. It was founded in 1907, by amalgamating a number of separate institutions. It was part of London University until 1907, when it became fully independent.[1] It claims to be "the only university in the UK to focus exclusively on science, medicine, engineering and business." Its main building occupies the site of the Imperial Institute. Its medical faculty is partly based at Charing Cross Hospital.

"Imperial is one of only four universities to match all ten criteria in a checklist looking at whether university practices and policies are welcoming and supportive of lesbian, gay and bisexual (LGB) students."[2]

David Harvey was Professor of Paediatrics and Neonatal Medicine at Imperial.

Imperial College Union LGBT was a member of the LGBT Consortium at one time.[3]