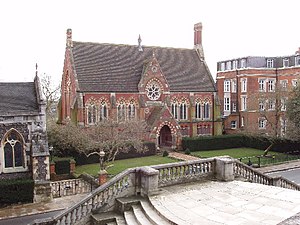 The Vaughan Library, Harrow School
Harrow School, founded in 1572, is one of the most prestigious public schools in England. It is located in the town of Harrow, in the London Borough of the same name.

Charles John Vaughan was Headmaster from 1845 to 1859 and the school's library is named after him. In 1859 he suddenly resigned as Headmaster, for reasons not explained until the 1970s.