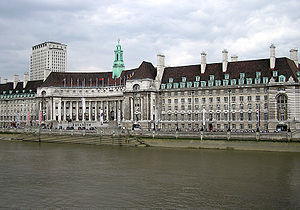 County Hall, headquarters of the LCC and GLC
The Greater London Council (GLC) was created in 1965 as the top-level authority for Greater London. It replaced the London County Council but had a much larger area. Its powers included the fire service, emergency planning, waste disposal and flood prevention, but most other local government functions were given to the newly-created London Boroughs. The GLC had responsibility for schools in Inner London (essentially the old LCC area) but this was given to the boroughs in the rest of Greater London.

In 1981 the Labour Party took control of the GLC and Ken Livingstone became its leader. He pursued a number of left-wing policies which annoyed the then Conservative government, leading to the abolition of the GLC in 1986. County Hall, which had been the headquarters of the GLC and previously the LCC, was sold off. Responsibility for Inner London schools was passed to a new body, the Inner London Education Authority.