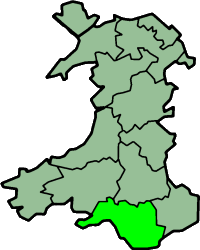 Traditional county of Glamorgan shown within Wales
Glamorgan was a historic county in South Wales containing at one time around a third of the population of Wales, and including the cities of Cardiff and Swansea.

In 1974 the county was abolished and replaced with the three counties of West Glamorgan, Mid Glamorgan and South Glamorgan, which together constitute the South Wales Police area. The three counties remain for ceremonial purposes as preserved counties, but have been replaced for administrative purposes by a larger number of unitary authorities, including Vale of Glamorgan.