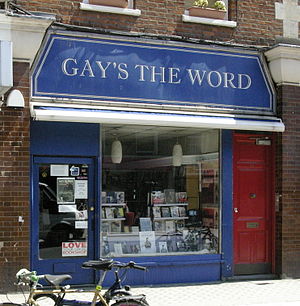 The shop was founded in 1979 by Ernest Hole and others from Icebreakers.[1] Gay's The Word was a gay mail order company before opening the shop [2].

In August 2011, the shop was damaged in the London riots, the only shop in the street to be targeted.[3]

In July 2012 the shop was burgled, with a safe and computer equipment being stolen.[4]

The shop featured in the film Pride, with Kingsgate Road in West Hampstead standing in for Marchmont Street in 1984.[5]

The Lesbian Discussion Group is a friendly and welcoming group and FREE (although there is a donations box to help support the bookshop). It meets at the shop every Wednesday.[6]