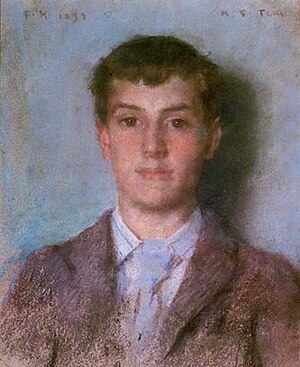 Frank Hird, by Henry Scott Tuke, commissioned by Lord Ronald Gower (1894)
Frank Hird (Robert Francis Hird, 1873–1937)[1] was a journalist and author of several books, including a biography of the explorer H M Stanley.[2] He was the companion and lover, and later adopted son, of the sculptor and writer Lord Ronald Gower.

Frank Hird was born in Hull[3] and became secretary to the Parliamentary Counsel Lord Thring. He was suffering fron rheumatic fever when Lord Ronald first met him in 1893. In 1898, by then Rome correspondent for the Morning Post, he accepted Lord Ronald's invitation to live with him as his adopted son,[4] and they stayed together until Lord Ronald's death in 1916.[2]

Frank Hird wrote a number of books, both fiction and non-fiction, including the following.[5]

"The most popular artist of nineteenth-century France, Rosa Bonheur was also one of the first renowned painters of animals and the first woman awarded the Grand Cross by the French Legion of Honor. ... Bonheur lived in two consecutive committed relationships with women."[6]