From LGBT Archive
Revision as of 10:43, 24 December 2015 by Ross Burgess (Talk | contribs) (Created page with "The Almonry, originally part of Evesham Abbey'''Evesham''' is a market town in the Wychavon district of Worcestershire. it is ...")
(diff) ← Older revision | Latest revision (diff) | Newer revision → (diff)
Jump to: navigation, search 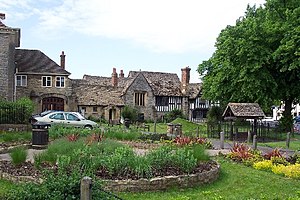 The Almonry, originally part of Evesham Abbey
Evesham is a market town in the Wychavon district of Worcestershire. it is situated on a bend of the River Avon, in the Vale of Evesham. Evesham Abbey, founded 701, became possibly the largest Abbey in England, but little of it now remains apart from the bell tower.

William Sidney Holtom lived in Evesham as a man, until discovered to be a woman on being admitted to hospital.