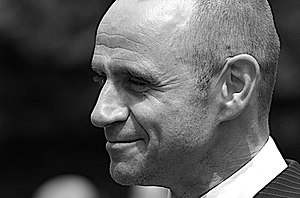 Evan Davis, 2007
Evan Harold Davis (born 1962) is a British economist, journalist, and BBC presenter. He was economics editor for the BBC Newsnight programme from 1997 to 2001, and edited the BBC's Evanomics blog. Since 2008 he has been a regular presenter on Radio 4's Today programme. He also presents The Bottom Line on Radio 4, and Dragon's Den on BBC2.

Davis was ranked number 1 in the Independent on Sunday's Pink List 2008. The citation included "Intelligent, with a less adversarial style than John Humphrys, Davis is considered the perfect complement to the existing roster of heavyweights."[2]

In July 2014 it was announced that he was to replace Jeremy Paxman as presenter on Newsnight.[3]