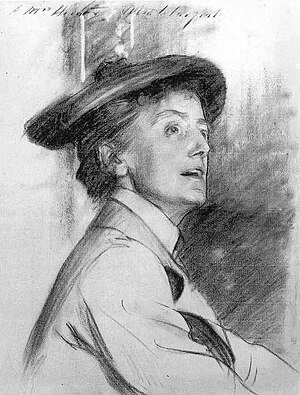 She was born in South London. Her father, an army general, was very much opposed to her persuing a career in music, but she finally persuaded him to let her study at the Leipzig, Conservatory, where she met Brahms, Clara Schumann, and Tchaikovsky[1]

She lived for many years at Frimhurst, near Frimley Green.[2]

In 1910 she joined the Women's Social and Political Union, which was campaigning for votes for women. She wrote the movement's anthem, "The March of the Women" and was sent to prison for breaking a politician's window.

She composed works in various genres: her opera The Wreckers has been described as the "most important English opera composed during the period between Purcell and Britten."[3]

"Because I have conducted my own operas and love sheep-dogs; because I generally dress in tweeds, and sometimes, at winter afternoon concerts, have even conducted in them; because I was a militant suffragette and seized a chance of beating time to "The March of the Women" from the window of my cell in Holloway Prison with a tooth-brush; because I have written books, spoken speeches, broadcast, and don't always make sure that my hat is on straight; for these and other equally pertinent reasons, in a certain sense I am well known."[4]

Smyth had several passionate affairs, most of them with women. Her philosopher-friend and the librettist of some of her operas, Henry Bennet Brewster, may have been her only male lover. She wrote to him in 1892:

"I wonder why it is so much easier for me to love my own sex passionately than yours. I can't make it out for I am a very healthy-minded person."[5]

In the 1880s she had affairs with Mary Benson, wife of the Archbishop of Canterbury, and then with Mary's daughter Nellie.

Smyth was at one time in love with the married suffragette Emmeline Pankhurst. At age 71 she fell in love with writer Virginia Woolf, who, both alarmed and amused, said it was "like being caught by a giant crab", but the two became friends.[6]