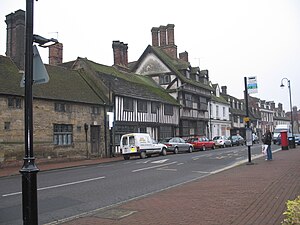 14th century timber framed buildings in the High Street
East Grinstead is a town in the Mid Sussex district of West Sussex. Until 1974 it was in East Sussex.

East Grinstead and the surrounding area host a large number of different religious organisations, including the Mormons and the Scientologists.

Peter Katin went to school in East Grinstead, and Richard Fairbrass was brought up there.