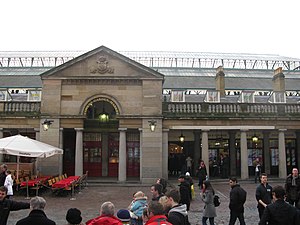 Covent Garden Market
Covent Garden is an area of the West End of London, partly in the City of Westminster and partly in Camden. It is mainly in the WC2 postcode area. In the middle ages it was used for arable land and orchards belonging to Westminster Abbey, and hence called the "Convent Garden". In the 18th century it was noted for its taverns and brothels. During the 19th century, Covent Garden Market became very important, particularly for flowers, fruit and vegetables.

In 1974 the market was moved to Nine Elms, and the classical market buildings have now become a shopping centre (with many small and specialist shops) and tourist area. Covent Garden is also noted for the Royal Opera House and other theatres.

In the 1880s, a group of Uranian friends used to meet at Gatti's restaurant, Adelaide Street.

From April to July 1971, GLF meetings were held in "Middle Earth", King Street, a large basement in the market area.[1]

Gay London, 1997 lists 53 establishments on its map of Soho and Covent Garden, notably the Covent Garden Health Spa, Kudos, Halfway to Heaven and the Brief Encounter.