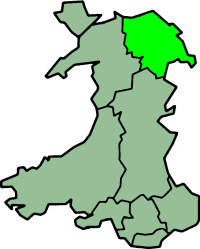 Clwyd (original borders) shown within Wales
Clwyd is a county in north-eastern Wales. It was formed in 1974 during a major reorganisation of Welsh local government.

In 1996 the county was abolished, and replaced with four unitary authorities: Conwy, Denbighshire, Flintshire and Wrexham. Clwyd was retained for ceremonial purposes as a preserved county, but expanded to include the whole of the county borough of Conwy, which was formed from Aberconwy (formerly in Gwynedd) and Colwyn (formerly in Clwyd).

Clwyd and Gwynedd together form the North Wales Police area.

The Ladies of Llangollen lived in Langollen, Denbighshire.