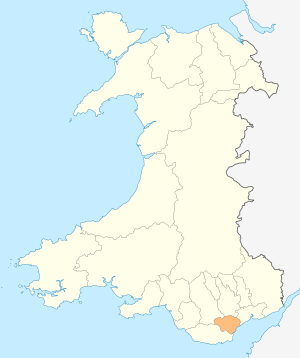 Location of Cardiff within Wales
Cardiff (Welsh: Caerdydd) is the largest city in Wales, and has been the capital of Wales since 1955. It was previously the county town of Glamorgan, and subsequently of South Glamorgan. It is now a unitary authority, as the City and County of Cardiff. The City of Cardiff now includes the cathedral town of Llandaff. Cardiff grew considerably in the 19th century as a port for the export of Welsh coal. The Cardiff Bay area has been much redeveloped since 1990. Cardiff University is based in the city.

The Cardiff CHE Group was founded in 1971.

The LGBT Excellence Centre is based in Cardiff.

Cardiff Mardi Gras is held in September. In 2013 it is being held in the Millennium Stadium on the 31st of August.[1]

The Kings Cross, Cardiff was a long-established gay pub.