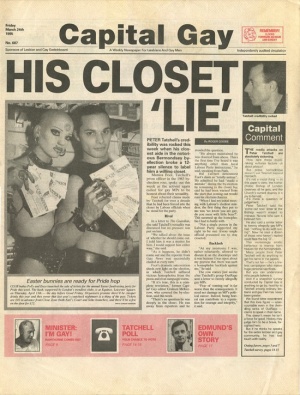 Cover of issue 686 (24 March 1995)
Capital Gay was a weekly free gay newspaper published in London. It was founded by Graham McKerrow and Michael Mason and published its first edition on 26 June 1981, Pride Week. Its last edition appeared on 30 June 1995, having become Britain's longest-running gay newspaper. Despite its name it was also distributed in Brighton and had a combined circulation, in the two cities of around 20,000 when it folded.

Capital Gay sponsored the London Lesbian and Gay Switchboard and involved itself in events in the wider gay community in London; its editorial line tended to be strong. It is credited by the Oxford English Dictionary with being the first publication in the world to use the term HIV, (the second being the international science journal Nature [1] with the first regular column on AIDS in the world being written in Capital Gay by Julian Meldrum in 1982.

During the controversy over Section 28 in December 1987, the paper's offices were targeted in an arson attack. Conservative MP Dame Elaine Kellett-Bowman was quoted as believing this was a good thing and when challenged in Parliament said "I am quite prepared to affirm that it is quite right that there should be an intolerance of evil."[2]

After its collapse in the summer of 1995, its editor moved to the Gay Gazette which was founded by Chronos Publishing a week later to soak up its advertisers.

Editors of Capital Gay were: