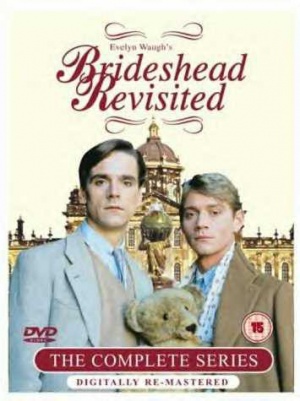 DVD cover from the TV series, with Jeremy Irons and Anthony Andrews
Brideshead Revisited is a novel by Evelyn Waugh, published in 1945, and regarded by the author as his magnum opus.

The novel is narrated by an army officer, Captain Charles Ryder. In 1943 his unit is posted to a stately home, Brideshead in Wiltshire, which he had been acquainted with before the war in very different circumstances. The novel traces his involvement with the Flyte family, owners of Brideshead, from his days at Oxford, 20 years before.

At Oxford, Charles meets the younger son of the family, Lord Sebastian Flyte. They become friends and probably lovers, although the this is never made completely explicit. However their relationship founders as Sebastian sinks into alcoholism, and Charles later has a relationship with Sebastian's sister Julia. The Flytes are an old Roman Catholic family, and the tension between the desires of the characters and the teachings of the church is a major theme of the book.

Many of the characters are thought to have been based on real people. In particular Lord Marchmain, head of the Flyte family, has similarities with the Liberal politician William Lygon, 7th Earl Beauchamp, and Sebastian is thought to be based on the earl's younger son Hugh Lygon who may have been Waugh's lover at Oxford.

In 1981 Granada Television produced an 11-part television series based on the book, starring Jeremy Irons as Charles and Anthony Andrews as Sebastian. In 2010 The Guardian placed the series second in a list of the top 50 TV dramas of all time.[1]