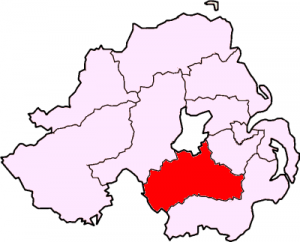 Paul Berry was born in Craigavon.

The Australian outlaw Captain Moonlite was born in Rathfriland.

The Oasis LGBT&H Youth Project was holding an information evening for Armagh young people in November 2011.[1]

Banbridge Craigavon LGBT Discos were being held at the Coach Cocktail Bar in Banbridge in 2009.[2]