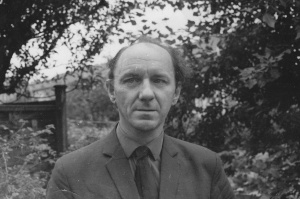 Allan Horsfall in the 1960s
Allan Horsfall (1927–2012) was a gay campaigner, founder and life president of the Campaign for Homosexual Equality (CHE).

Allan Horsfall was born and brought up in the Emmott Arms pub in Laneshaw Bridge, Lancashire and attended Nelson Grammar School. Towards the end of World War II he was called up into the Royal Air Force and spent some time in Germany.

After the war he joined the local Royal Air Force Association and met Harold Pollard who moved into the pub. Harold and Allan shared a bed beause of the lack of space, but it took some time before each realised the other was gay. They became an item and took a house together in Nelson: Harold became a head teacher and Allan started working for the National Coal Board.

In 1956, Allan Horsfall joined the Labour Party, and was subsequently elected to Nelson council. 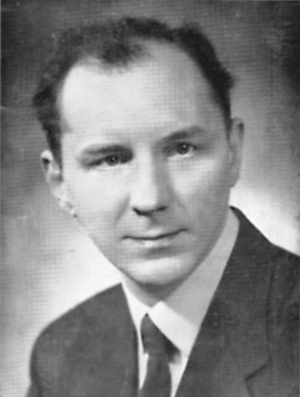 Allan Horsfall in 1958
In 1957 the Wolfenden Committee proposed the limited decriminalisation of sex between men. The Conservative Government that had appointed the Committee showed little sign of wanting to implement its recommendations. Allan was concerned at the lack of progress towards legalisation, but hesitant to get involved. He went down to London and visited Peter Wildeblood, who had gone to prison for having a gay relationship, and written a book about his experiences. Wildeblood challenged Allan “What’s the worst than can happen?” Allan went home determined to get the matter raised through the local Labour Party, but faced great obstruction in even getting it debated.

In 1963 the HLRS decided to set up local groups; as a result the North West Committee for Homosexual Law Reform (NWCHLR) was set up in 1964, with Allan Horsfall as the main organiser and secretary. The Committee decided to issue a leaflet, and it appeared with Allan’s home address in Atherton as the contact point. This was a bold move, as it could have left Allan in danger of physical attack, or of being evicted from his Coal Board house (he was working in a Coal Board office). One of these leaflets went to the local paper, which ran a front page article with 8-column banner headlines, “Homosexuals and the Law”. There was no public outrage, showing that Northern mining communities were not as reactionary on this issue as many opponents of reform had been claiming.

By 1966 the NWCHLR was no longer describing itself as a subgroup of the HLRS. Relations with the London-based HLRS had always been delicate: the HLRS was always dominated by straight people (or in some cases closeted gays) whereas Allan’s Committee was always led by gay men and lesbians.

Allan and the North-West Committee continued campaigning actively for law reform. Eventually, the Sexual Offences Act 1967 was passed, making sex between men legal. Many of its supporters, including Allan, were very disappointed that the Act did not even go as far as the limited reform proposed by the Wolfenden Committee, but there seemed little prospect of further legisltation in the short term.

The need was now to work for social facilities for gay people, and Allan, together with the journalist Ray Gosling, put much effort into promoting a network of Esquire Clubs in different parts of the country, similar to the working men’s clubs with which Allan was very familiar, to be owned and run by gay people, as an alternative to cottaging or the seedy commercial gay scene. They came close to achieving this several times, in Manchester and elsewhere, and faced down public objections at a very lively public meeting in Burnley, but never actually managed to open a single club.

In 1969 the NWCHLR reformed itself as the Committee for Homosexual Equality (CHE), The word “Equality” is significant. Much of the political pressure behind the passing of the 1967 Act had come from straight society, concerned to reduce the danger of gay men being blackmailed: the idea that homosexuals should campaign in their own right and seek to be equal with heterosexuals was a radical one.

CHE thus became a national organisation, with Allan as its chairman. In 1971 it changed its name to Campaign for Homosexual Equality. Over the next few years it started a network of local CHE groups, and achieved a membership in the thousands. Thus Allan had transformed a small specialist northern committee to a mass movement campaigning for reform and supporting gay people throughout the country.

In 1970, Allan suffered a severe heart attack, and was forced to step back from the leading role in CHE, but he was appointed Life President, and continued to campaign.

A dilemma arose with the suggestion of reducing the age of consent to 18. This was a tempting idea, which would make life a lot easier for young gay men aged 18 to 20. But Allan was resolute that “Equality” in CHE’s title meant what it said. CHE should not accept 18, but go for 16 since that would mean equality with heterosexuals. By accepting 18, the case for true equality would be put back for years. In the event, the age was reduced to 18 in 1994, and full equality was not achieved until 2000.

In 1998, the Bolton Seven were prosecuted for gross indecency. This showed up one of the limitations of the 1967 Act, that gay sex was still illegal where more than two people were involved. Ray Gosling and Allan pursued the case, and persuaded the accused to plead not guilty. The Seven they were convicted, but the case went to the European Court of Human Rights; they were awarded compensation, and the law was subsequently changed.

Alongside Allan’s gay campaigning, he was an active campaigner in several other fields – in the Labour Party, for CND, and for local bus services. He never had a high-powered job, preferring a simple clerical job that would leave him time for his campaigns.

In March 2000 Allan Horsfall received The Pink Paper Award for his services to the gay community.

Allan Horsfall and other gay rights campaigners who lobbied for a change in the law for 40 years were honoured in a ceremony at Manchester Town Hall in October 2004.[2]

Many of Allan Horsfall's papers are held in the Manchester Archives [3].

On 20th October 2012, which would have been Allan’s 85th birthday, a celebration of Allan Horsfall’s life was held in the Banqueting Room at Manchester Town Hall, sponsored by CHE. The event was compered by the author and performer Peter Scott-Presland, who is writing the official history of CHE. The speakers included:[4]

Much of the information in this article is from Amiable Warriors Volume One, Chapter 2.