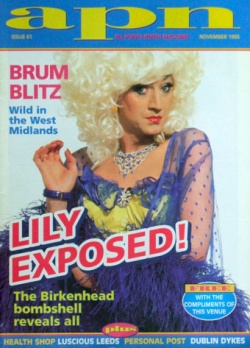 All Points North magazine, November 1995
All Points North (APN) was an A4 glossy monthly A4 magazine focussing on the gay and lesbian scene around Manchester and Sheffield.

It was founded by Terry George, founder of Mr Gay UK, based in Leeds. Terry appeared in the UK television programme Secret millionaire in which wealthy people go undercover to find and help people in need. Jane Czyzselska was editor of APN, before going on to work for the free newspaper Metro, and is now editor of DIVA. In 1995 Terry sold APN to Kelvin Sollis at Chronos Publishing, where it continued to be published from their London base. It was then designed by Jonathan Harbourne. It was published for a further 12 months before Chronos decided they could no longer make it pay, or that it was detracting from their northern edition (one of several weekly regional editions) of Boyz magazine. In the purchase agreement, Terry was forbidden to publish a magazine in the region for a certain length of time. He later went on to publish xxxxxx magazine.