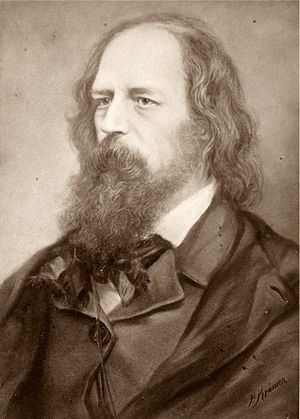 Alfred, Lord Tennyson, portrait by P Krämer-Friedrich Bruckmann
Alfred Tennyson, 1st Baron Tennyson (1809–1892) was Poet Laureate during most of Queen Victoria's reign. He was born in Somersby, Lincolnshire, and went to school in Louth. While at Trinity College, Cambridge he was a member of the Apostles.

Tennyson is the ninth most frequently quoted writer in The Oxford Dictionary of Quotations, with phrases such as "'Tis better to have loved and lost / Than never to have loved at all", "Theirs not to reason why, / Theirs but to do and die", "My strength is as the strength of ten, / Because my heart is pure", and "The old order changeth, yielding place to new".

In 1833 Tennyson's best friend Arthur Hallam died. They had been students together at Trinity College, Cambridge and Hallam had been engaged to Tennyson's sister. Tennyson poured out his grief in the poem In Memoram A H H. The poem includes sexual imagery; for example, the poet compares his sorrow to the sorrow of a loving widower who misses his late wife in bed.

"Tears of the widower, when he sees
A late-lost form that sleep reveals,
And moves his doubtful arms, and feels
Her place is empty, fall like these."[1]

This is not a unique example and material that can be interpreted as homoerotic is widespread in Tennyson’s work. There has been speculation that Tennyson may have experienced homosexual feelings for his friend, though there is no question that he was strongly attracted to women. If Tennyson had bisexual feelings there is no firm evidence that he acted on them.[2]

Tennyson named his eldest son Hallam after his friend.