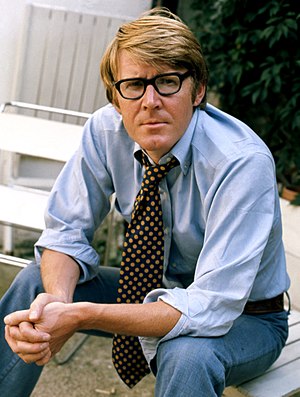 Alan Bennett in 1973, photographed by Allan Warren
Alan Bennett (born 9 May 1934) is a British playwright, screenwriter, actor and author. Born in Leeds, he attended Exeter College, Oxford where he studied history and performed with The Oxford Revue. He stayed to teach and research mediaeval history at the university for several years. His collaboration as writer and performer with Dudley Moore, Jonathan Miller and Peter Cook in the satirical revue Beyond the Fringe at the 1960 Edinburgh Festival brought him instant fame. He gave up academia, and turned to writing full time, his first stage play Forty Years On being produced in 1968.

His output includes The Madness of George III and its film incarnation The Madness of King George, the series of monologues Talking Heads, the play The History Boys, and popular audio books, including his readings of Alice's Adventures in Wonderland and Winnie-the-Pooh.

Bennett was born in Armley in Leeds, West Riding of Yorkshire. The son of a co-op butcher, Walter and his wife Lilian Mary (née Peel), Bennett attended Christ Church, Upper Armley, Church of England School (in the same class as Barbara Taylor Bradford) and then Leeds Modern School (now Lawnswood School), learned Russian at the Joint Services School for Linguists during his National Service and gained a place at Sidney Sussex College, Cambridge. However, having spent time in Cambridge during national service, and partly wishing to follow the object of his unrequited love, he decided to apply for a scholarship at Oxford University. He was accepted by Exeter College, Oxford from which he graduated with a first-class degree in history. While at Oxford he performed comedy with a number of eventually successful actors in the Oxford Revue. He was to remain at the university for several years, where he researched and taught Mediaeval History, before deciding he was not cut out to be an academic.

In September 2005, Bennett revealed that, in 1997, he had undergone treatment for cancer, and described the illness as a "bore". His chances of survival were given as being "much less" than 50%.[1] He began Untold Stories (published 2005) thinking it would be published posthumously. In the event his cancer went into remission. In the autobiographical sketches which form a large part of the book Bennett writes openly for the first time about his homosexuality (Bennett has had relationships with women as well, although this is only touched upon in Untold Stories). Previously Bennett had referred to questions about his sexuality as like asking a man who has just crawled across the Sahara desert to choose between Perrier or Malvern, mineral water.[2]

Bennett lives in Camden Town in London, and shares his home with Rupert Thomas, the editor of World of Interiors magazine. Bennett also had a long-term relationship with his former housekeeper, Anne Davies, until her death in 2009.

Alan Bennett was rated number 55 in the Pride Power List 2011 and a "National Treasure" in the Independent on Sunday Pink List 2011.